THE FORSTER COUNTRY is the last remaining farmland within the Borough of Stevenage.

Famous throughout the world for its connections with the novelist E.M. Forster, this little piece of England provides vital breathing space, both physical and spiritual, for the people of Stevenage.

From the north end of Stevenage High Street you can walk from the Bowling Green, up the tree-lined Avenue to St. Nicholas Church. Wandering through the church yard is a path, follow the path until you find the modern sculpture inscribed "Only Connect". Past the sculpture the path emerges into a vista of gently undulating fields and hedges. The view is of the last remaining farmland within the borough of Stevenage. This is the Forster Country

E.M. Forster (1879-1970) was the author of Where Angels Fear to Tread, The Longest Journey, A Room with a View, Howards End, A Passage to India and Maurice, as well as short stories, essays and other work. From 1883 to 1893 he lived at "Rooks Nest" a house past St. Nicholas church on the old winding road to Weston. It is now in a cul-de-sac section. It was memories of his time here that formed the setting for Howards End published in 1910.  The house had originally been owned by the Howard family. See also  Hilton – the town of Howards End.

The story of Forster's childhood at "Rooks Nest" and his later associations with Stevenage and its countryside are described in Forster Country by Margaret Ashby, published by Flaunden Press, 1991, ISBN 0951824201, price £14.95. Enquiries about purchase posted on the Contact Us page of the website will be forwarded to the author.


For many people the entry to Forster Country is past the Only Connect sculpture in St Nicholas' churchyard and the spire is a welcome sight from much of the present area of Forster Country. To find more about the building, the parish and services, visit http://www.saintnicholaschurch.org.uk/. 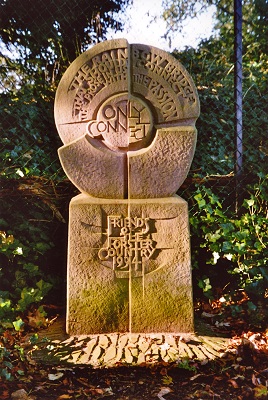 The sculpture, "Only Connect" takes its name from the subtitle of Forster's Howards End. As well as marking the entrance to the Forster Country, it also commemorates the year 1994 when the land was first included in the Green Belt boundary. The Sculptor Angela Godfrey, BA, ARBS is one of this country’s leading sculptors. Her work has been widely exhibited, including several one-person shows. She has worked with the architect Richard Hurley on the re-ordering of churches at Hoddesdon, Harrow Weald, Ballyporeen in Co. Tipperary and Maidstone, among others. In 1994 she won an open competition for a street sculpture for the London Borough of Enfield, sited in Fore Street, Edmonton.


In 1946, when he took part in the first campaign to save the countryside around his old home from development, Forster said in a radio broadcast, “I was brought up as a boy...in a district which I still think the loveliest in England.”   In 1961 the Guardian newspaper coined the name “Forster Country” for this area north of Stevenage. By this name it is known throughout the world. Students, scholars and the general public come here from Europe, America, Canada, Australia and Japan. In 1979, the centenary of Forster’s birth, over 2,000 people came to Stevenage on account of the Forster connection. 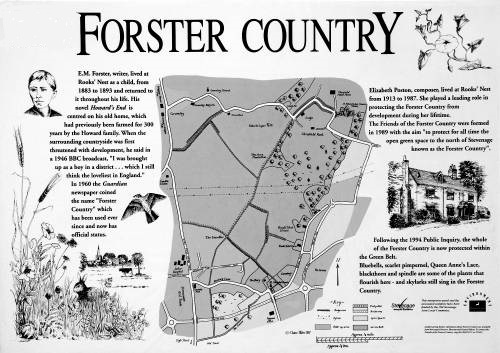